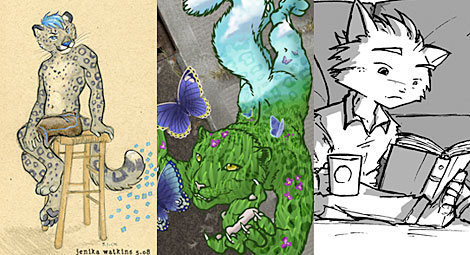 In the early days of the public Internet there was a joke that, “On the internet, nobody knows you're a dog.” Well, I'm more of a cat person. Or cat-person, to be precise.

Throughout our lives we show different sides of ourselves to different people, usually without even thinking about it. Just being in a work, or family, or friend setting will mean we're perceived differently by the people who only know us in those contexts. It's as though we wear different masks for different occasions.

One of my masks had whiskers and a different name. It was the mid-90s and I was 15 when I first thought Makali up, and I had a lot of fun talking to people through him. There turned out to be a whole bunch of other people who pretend they're animals online too, and some of them are pretty great. I think you have to be pretty open-minded and creative to hang out with people who pretend to be dogs and cats, and foxes and the like, and those are traits I find pretty appealing.

But it wasn't just fun, he was a buffer too; a way to feel safe among strangers, and a way to control who to allow into my personal life. I think that having an alter-ego really helped me to think about my real identity, and how I approached and thought about other people, too.

Makali grew and changed with me for almost 20 years, but after a while he became a bit too familiar, too settled to keep changing with me as I kept growing into who I am today. I'll always remember him fondly, and I'll always be a cat-person on the internet.